The Big Bet On Crypto 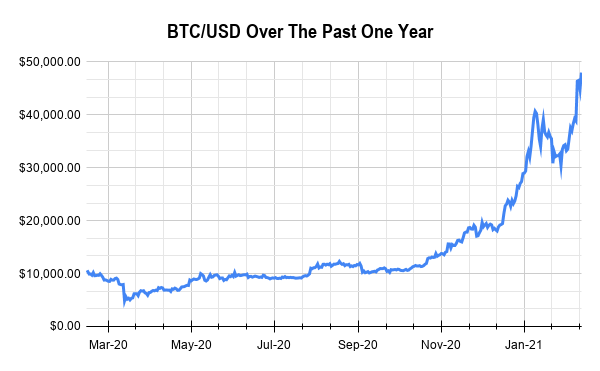 While cryptocurrencies are often heralded as a gambler’s playground, digital assets are ironically all over the news portraying the wild bullish run in the markets and promising future returns for the investors. Cryptocurrencies have received a fresh boost following a backing from Elon Musk when his firm Tesla bought about $1.5bn (£1.1bn) of Bitcoin. The investment by the world’s richest man helped Bitcoin to jump 17% to $44,220, a record high. The company also said it would begin accepting the digital token as a form of payment for its electric cars. Musk has also been talking about Bitcoin and other cryptocurrencies, including Dogecoin, which jumped 50% after his endorsement. Not just Musk, MicroStrategy CEO Michael Slayer called Bitcoin ‘the scarcest asset in the world’ indicating to the precious limited supply of the currency.

Has all the optimism in the news got you wondering “Should I invest in Cryptocurrency for outsized portfolio returns”? Is this a bubble or a financial revolution? With high returns comes the high risk associated with the volatility of cryptocurrency. A zero-dollar tweet has the capacity to make the prices change more than one can imagine. For a retail investor who doesn’t have the understanding about the working of the crypto world, it’s no less than a game of poker. Ignorance makes you vulnerable and it’s often said that if you can’t explain your investments to a 10-year-old, you have no business investing in them to begin with. Until recently, Bitcoin’s immature financial ecosystem, extreme volatility and legal ambiguities made it inappropriate for anyone but speculators.

Bitcoin represents an asset class of a borderless digital currency which started from the value of zero and has now skyrocketed to an all-time high.

Merely 12 years ago, Satoshi Nakamoto published a paper on the internet intending to create a version of electronic cash that would allow payments to be sent directly between two parties, without the involvement of any financial institution. Bitcoin was the first cryptocurrency to arrive into the markets, followed by other alt coins like Ethereum, Litecoin, Ripple, etc.

Cryptocurrency is a digital asset over which financial institutions exercise zero control; an idea which has been converted into reality and is being traded over crypto exchanges all around the world. Satoshi designed an alternate financial system based on software technology, which would be outside the control of any third party. Today, more than 2000 cryptocurrencies are available on the internet for the investors.

Talking about Bitcoin, each transaction is verified by miners by solving complex mathematical equations using the best technology computers. Once the transaction is verified and confirmed by the network, it is added to the Blockchain. Cryptocurrency can be used both as an investment and as an alternative currency, but the former is being the major use today as the bullish run promises high returns. Bitcoin is also referred to as a digital gold now.

The Lindy Effect indicates that Bitcoin has an ability to survive, even in a hostile environment. Now what is The Lindy Effect? The Lindy effect argues that for a non-perishable object, its life expectancy increases with how long it has lasted.

Bitcoin has been around for 10 years with many enemies, and something that has survived such a long time with high exposure throughout the years, has a certain degree of survivability. But not all arguments are in the favor of Bitcoin. Bitcoin being a digital currency has no underlying asset of value of its own. Bitcoin is still a niche product and does not have widespread acceptance among the masses, and is not an accepted medium of exchange. This is primarily because of the technical challenge caused by the time taken to add a transaction to the blockchain being as high as around 10 minutes. But it proves to be an efficient and economical tool for foreign funds transfer, having no transfer fee.

No investment instrument is perfect and bitcoin is no exception. Bitcoin is highly volatile and thus proves to be a risky business. The supply of bitcoin is meant to be limited to only 21 million, out of which almost 90 percent has already been mined. People who want to remain anonymous and avoid regulation from banks or the government often use cryptocurrencies to make shady deals in the black market. Money laundering is also a problem in the crypto world. A peer-to-peer exchange without any tie to regulatory standards and no pattern to its rise and fall, can be seen as no less than gambling. You can’t predict changes or calculate returns in the crypto market which therefore develops a pessimistic opinion that there just isn’t enough data, or enough credibility, to create a long-term investing plan based on cryptocurrency.

Cryptocurrency is now here to stay, but will not be limited to only Bitcoin. Futurists believe that they would occupy 25% of natural currencies by 2030. This makes us curious about the Alt coins available in the market. Solving the problem of transaction delay involved in bitcoin, Ripple (XRP) was introduced which takes less than 4 seconds to complete a transaction. It is a cross border payment platform which could be used by various centralized financial institutions and has also initiated to collaborate with banks to enable foreign funds transfer at a minimized cost in less time. Ether (ETH) is a currency accepted in the Ethereum network that offers unlimited supply in the market by issuing 18 million new coins every year. The block creation time of ether is also around 25 seconds making it an interesting alternative. Another option is Litecoin (LTC), a peer-to-peer cryptocurrency launched in 2011. Having a limited supply of 84 million coins, its structure is similar to that of bitcoin. The block creation time of Litecoin is of an average of 2.5 minutes and its use of Scrypt as a proof-ofwork algorithm portrays it as a better option. It has earned industry support along with high trade volume and liquidity over the years. Alt coins are a great investment opportunity if they are properly researched about regarding their origin and operation and ensuring that it’s not merely a token involving a pump and dump scheme.

The shortcoming of volatility is overcome by another class of cryptocurrency called Stable coins, offering the same level of privacy and security to the transactions. In actual practice, this is achieved by tying the value of the coins to existing currencies like the U.S. dollar, the Euro, and gold. Facebook’s Libra is by far the most famous stable coin, which is prepared to be launched this year. The key difference between Libra and Bitcoin is the permissionless versus permissioned blockchain. Simply put, a permissionless blockchain implies that anyone with the right hardware infrastructure can apply the mining protocols and participate in validating transactions and in becoming a validating node on the Bitcoin network. Libra is going to be a permissioned blockchain that is centralized where its consensus mechanism, software and governance are controlled by Libra Association members who are the only ones permitted to validate transactions.

Cryptocurrency is no joke, but it also makes us talk about Dogecoin (DOGE), a digital currency that was initially launched as a joke, based on a viral dog meme, which has now surprisingly managed to surpass all-time highs with an 800 per cent surge. This ended up giving the meme-based cryptocurrency a market value of about $7 billion. Dogecoin was initially started by software engineers Billy Markus and Jackson Palmer, who decided to create a payment system that is instant, fun, and free from traditional banking fees. The coin enjoyed a tremendous bull run after Elon Musk tweeted to support and managed to touch the all-time high price of $ 0.0839 on Jan 8, 2021. And now, Dogecoin is the 10th most valuable cryptocurrency by market value. Following the predictions for 2021 based on technical analysis by the experts, it might compete with other peer

cryptocurrencies and might even go up in the ranking. 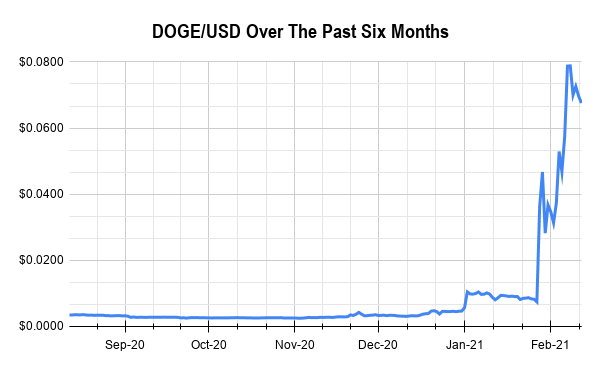 The news isn’t always favorable for the controversial cryptocurrency. India is still skeptical about the crypto assets. Finance Minister Nirmala Sitharaman said that a high-level Inter-Ministerial Committee (IMC) constituted under the Chairmanship of Secretary (Economic Affairs) recommended in its report that all private cryptocurrencies, except any virtual currencies issued by state, will be prohibited in India. In 2018, the Reserve Bank of India had banned banks from processing transactions relating to cryptocurrency which was overturned by the Supreme Court in March 2020. To provide clarification regarding the ambiguity about its future in the country, the bill regarding the same will soon be presented in the cabinet. The government has also proposed to launch Reserve Bank of India (RBI) backed Central Bank-backed Digital Currency (CBDC). India isn’t the only country to consider the possibility of launching its own crypto-currency. Others have either done that or mulling their options. Nations like Ecuador, China, Singapore, Venezuela Tunisia and Senegal have already issued their own cryptocurrencies. But the news about the ban has generated confusion and fear among the Indian investors. Financially aware individuals in India don’t want to miss out on the stellar returns offered by digital assets. It has made the investors question if it would be a better option for the investors to square off their positions in the near future or to keep their confidence high with Bitcoin surging over 300 per cent in just one year!